EPISODE 28: THE DHARMA IN DIFFICULT TIMES 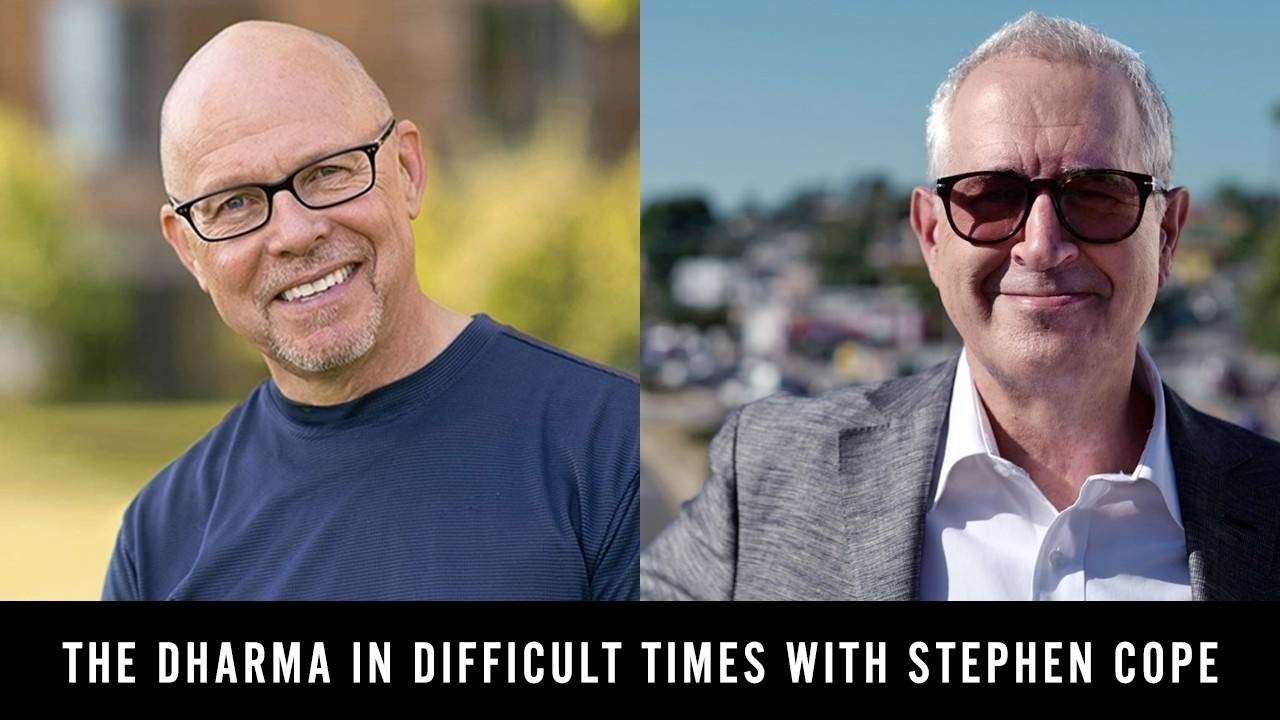 Stephen Cope, MSW, Scholar-in-Residence and Kripalu Ambassador, is the founder and former Director of the Kripalu Institute for Extraordinary Living. He is the author of several best-selling books, including Yoga and the Quest for the True Self; The Great Work of Your Life: A Guide for the Journey to Your True Calling; Soul Friends: The Transforming Power of Deep Human Connection; and his new release due out January 2022, The Dharma in Difficult Times: Finding Your Calling in Times of Loss, Change, Struggle, and Doubt. For more info please visit StephenCope.com.

Finding the Path: Trungpa Rinpoche, Meditation, & Kripalu
Opening the episode, host Michael Kammers—your intro and outro monologist—sets the table, introducing bestselling author and Kripalu scholar, Stephen Cope, to the podcast. Sparking the conversation, David Nichtern invites Stephen to share how creativity, spirituality, and earning a living all play a role in his daily life as an established writer and yoga/mindfulness scholar and teacher. From here, they discuss how Stephen found the Dharma through Chögyam Trungpa Rinpoche, meditation, and Kripalu.

“When I arrived at Kripalu, yoga was still pretty fringe, and we decided in order to make it more mainstream, we had to have the imprimatur of actual science, we had to study what are the real effects, causes, and dosages—exactly what meditation is going through now.” – Stephen Cope

Connection Between Art, Music, & Mindfulness (20:02)
Speaking to his music practice as a classical pianist, Stephen Cope recalls spontaneous impromptu jam sessions in the basement at Kripalu, where he noticed a deep underlying correlation between his yoga and meditation practice positively affecting his range of piano skills. Playing off of Trungpa Rinpoche’s statement that, “Art is non-aggression,” Stephen shares how we can apply wisdom from the Bhagavad Gita to help us in our creative practices and ventures.

“I’m a classical pianist. When I moved to Kripalu, there were two grand pianos in the basement, so I’m cutting vegetables during the day, and at night I’m sitting at the piano practicing. People would show up with other instruments and we’d jam. It was completely spontaneous. So, I started to notice that my concentration skills and the whole range of piano skills were profoundly enhanced when I was practicing a lot of yoga and meditation.” – Stephen Cope

Dealing with Critics & The Dharma in Difficult Times (38:01)
Offering a story spanning from his mother, to psychologist Sigmund Freud, to composer Sergei Rachmaninoff; Stephen explores the nuances of how artists deal with critics, explaining the intrinsic lightness that can come from not caring what others think. A true renaissance man, David invites Stephen to share on his many expertises, discussing openness in relation to creativity and the spiritual path. To close, they dive into themes from Stephen’s upcoming book The Dharma in Difficult Times.

The book is an examination of the way in which the Bhagavad Gita—the great scripture of Arjuna’s odyssey for self realization—informs our struggle with xenophobia, racism, and hatred of the other.” – Stephen Cope