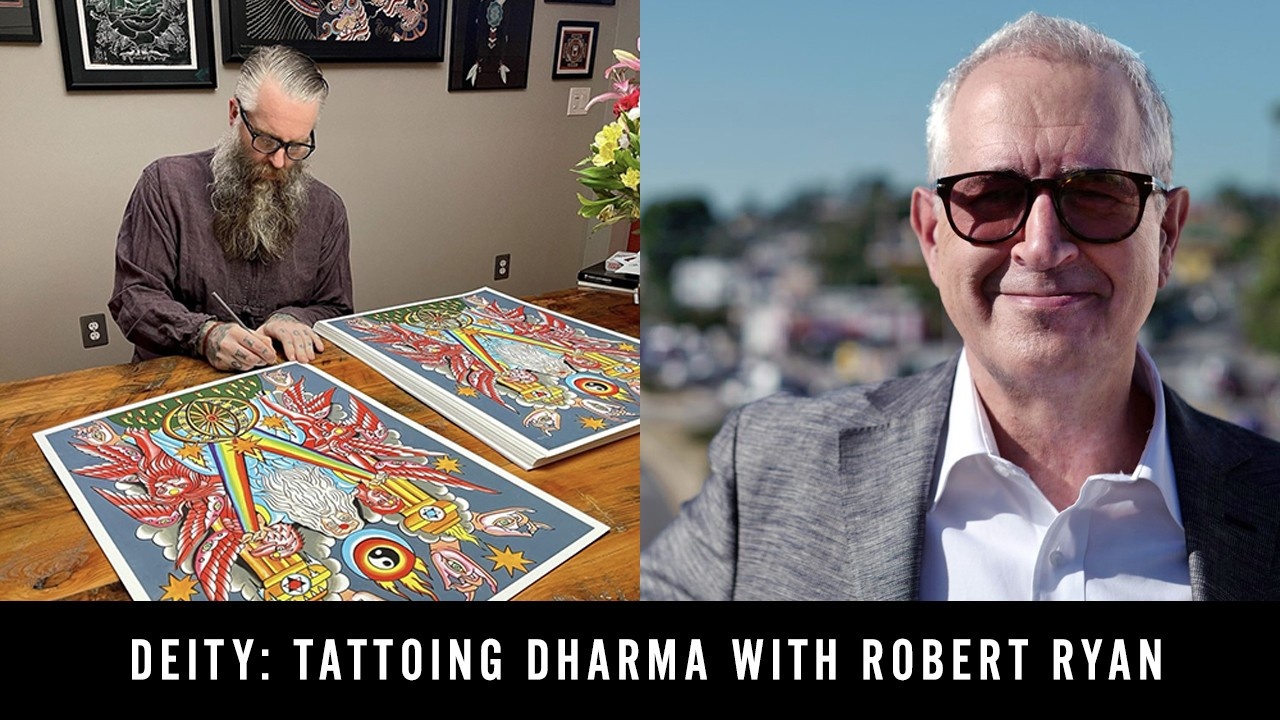 
Robert Ryan is a tattoo artist, painter, musician, business proprietor, and Dharma practitioner. A highly regarded tattoo artist, Robert has created a distinct and sought-after style merging the foundations of American tattooing with the style of Indian Kalighat painting – an approach to Deity depictions done quickly with simple lines and bold iconic images practiced by artists outside of the Kali temple in Calcutta.

Deity, A Living Portal // Weaving Tantra (13:31)
From here, they turn the page to Robert’s new book of paintings, Deity – a transcendent visual journey through a pantheon of stunning interpretations of Hindu Deities, mindfully adorned with illuminating devotional commentaries. Noting the basis of experiencing synchronicity as rooted in seeing the world through the heart rather than the conceptual mind, David and Robert speak to the underlying connections weaving together Hinduism, Buddhism, Tantra, theism, and non-theism.

“My goal for the book [Deity] was to show people a way of viewing these Deities as an aspect of their own selves, almost as a mirror, so that they would be able to see themselves in a picture of Ganesh—seeing aspects of their lives in these Deities. I tried to create a portal to each one where someone could bring their own thoughts toward that thing.” – Robert Ryan

Brahma, Vishnu, & Shiva // Art as an Access Point (31:13)
Affectionately retelling a Lila (Divine Play) of the Hindu Trimurti—Brahma, Vishnu, and Shiva—Robert inspires David to share on experiencing the resonance of Deities through playing kirtan music with Krishna Das. Exploring tattoos as potential catalysts for growth, Robert tells of how an artistic representation of Krishna as Lord Jagannath acted as a spiritual access point in his life. After jamming on some Grateful Dead, they close by talking Trungpa Rinpoche, India travels, the tattoo industry, Rishis, and householding.

“Some people get [Deity tattoos] with no connection at all to them—no cultural connection, no spiritual connection, Dharmic connection, or sadhana practice connection—they just like the way it looks. People have asked me before, ‘Do you think that’s disrespectful that someone might get this thing that might be appropriation?’ To me, no. That’s the access point. That might be the one thing that could change their life drastically the way it’s changed mine.” – Robert Ryan